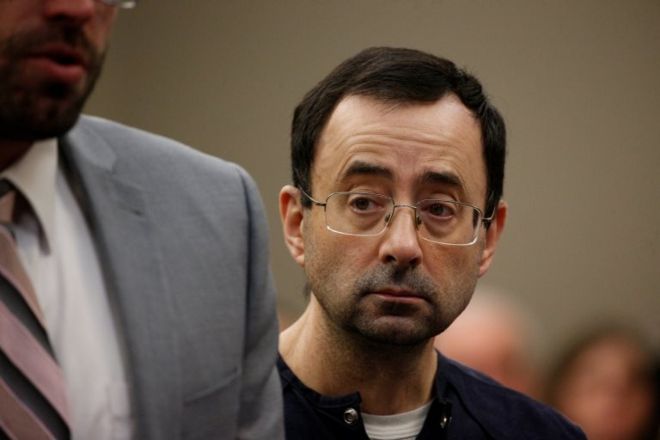 The courtroom erupted into applause on Wednesday afternoon as Larry Nassar, the former USA gymnastics team doctor and Michigan State University sports medicine physician exited stage left to spend the rest of his life in prison for the systematic sexual abuse of athletes under his care. Survivors and their families in the gallery wept and embraced. It was a catharsis hard-won by the bravery of dozens of young women, empowered by solidarity, who stepped forward to hold the powerful to account.

The terms of Nassar’s guilty plea on seven counts of first-degree criminal sexual conduct allowed for anyone who said they were a victim to read an impact statement in court. Remarkably, the total of 88 girls and women initially scheduled to speak nearly doubled over the course of the sentencing hearing as it spilled over into a second week. One by one they faced their nightmare incarnate, from household names like six-time Olympic medalist Aly Raisman, whose scorched-earth salvo will be long remembered, and countless more who never reached the elite level, putting forth searing testimony on the pathology of a sociopath who leveraged his authority and professional heft to betray the trust of young athletes and their families.

The last of the 156 survivors to testify before Nassar’s fate was sealed on Wednesday was Rachael Denhollander, a former gymnast turned Kentucky attorney who became the first woman to come forward publicly in September 2016 for the Indianapolis Star story that convinced dozens more to break their silence. “The number of sexual assault victims Larry had was plain to me,” she said in the immediate aftermath. “Whether or not anyone would feel safe to come forward, that was the wild card.”

“You do not deserve to walk outside of a prison ever again,” the judge, Rosemarie Aquilina, said before sentencing Nassar to jail for up to 175 years. “Anywhere you walk, destruction would occur to those most vulnerable. I just signed your death warrant.”

Angela Povilaitis, the assistant attorney general for Michigan, described him as “possibly the most prolific child abuser in history”.

“His practiced and perfected abuse spanned over 25 years,” she said, adding that he “used his prestige to gain the trust of these girls, to exploit them”.

She described him as “a master manipulator” who had deceived parents, the press, the police, prior investigators, and even tried to manipulate the judge through his “pathetic” letter of remorse.

“In competitive gymnastics he found the perfect place for this master manipulation,” she said.

“Young girls bear the pain. Their bodies are constantly on display. It takes some kind of sick perversion to abuse a girl while the parents are in the room.”

At times, she said, Nassar abused the girls at his home, while his wife and children were upstairs. And frequently the parents were in the room.

“To penetrate a young minor for your own sexual gains, while the parents sat just meters away, had to be part of the thrill,” she said.

“Nasser perfected a built-in excuse and defence: he was a doctor, and a good one – so the world thought.”

So far culpability for Nassar’s monstrous acts has fallen almost exclusively on the disgraced physician himself. But many of the statements from the survivors and their attorneys have targeted the individuals and institutions that allegedly enabled or were negligent in preventing Nassar’s abuse for as long as two decades: Michigan State, USA Gymnastics, the United States Olympic Committee and Twistars Gymnastics Club, all of which have been named as co-defendants in civil suits that appear headed to trial.

She added: “I find that you don’t get it. That you’re a danger. I’m a judge who believes in life, and rehabilitation. But I don’t find that’s possible with you.”

She praised the women who spoke out – not all of whom were party to the criminal case – saying: “You are no longer victims. You are survivors.”

Nassar
Larry Nassar, the disgraced doctor for the US gymnastics team, in court in Michigan
She noted that 310 out of ever 1,000 assaults are reported, so two in three are unreported. One in ten children will be sexually abused by their 18th birthday, she said.

“That means that in the United States, 400,000 babies born in the US will become victims of child sexual abuse,” she said.

“It stops now. Speak out like these survivors; become part of the army.”

She said there needed to be an investigation into the inaction, which saw Nassar get away with his crimes for decades.

Over the course of 25 years he was accused of abusing well over 150 girls who went to him for treatment. Among those who accused him were Olympic heroines Simone Biles, Gabby Douglas and Aly Raisman.

One woman, Kyle Stephens, was only six years old when the abuse began. Nassar, a family friend, began molesting her at her own home and her parents did not believe her when she told them.

“You convinced my parents that I was a liar,” Stephens told the court.

“Little girls don’t stay little forever,” she added. “They grow into strong women that return to destroy your world.”

Once her father realised she was telling the truth, he took his own life, Stephens said.