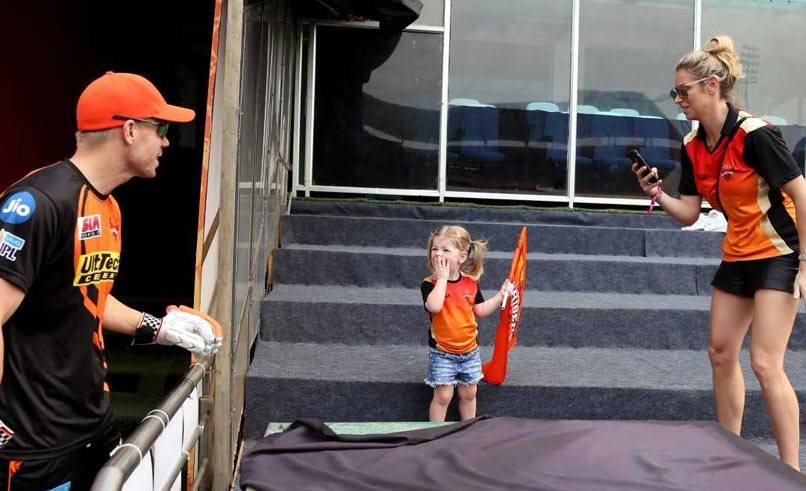 The 2016 IPL title winners Sunrisers Hyderabad retained their captain David Warner and pacer Bhuvneshwar Kumar for the Indian Premier League (IPL) 2018 season , 2018.The left-handed batsman led the side to the maiden title victory when the outfit defeated Virat Kohli-led Royal Challengers Bangalore by 8 runs in the final Warner will once again lead SRH in the 11th edition of the cash-rich league. , and will once again play in the tournament for the franchise.

With just two months for the awaited T20 tournament to begin, it seems the excitement has already reached overseas. In an Instagram post, Warner shared a video of his daughter Ivy Mae dancing to the anthem of Sunrisers. “Ivy Mae already excited about the @sunrisershyd anthem. Non stop wanting to play the song. Looking forward to
another amazing season with the Orange Army,” Warner wrote in the post.

e IPL auctions last week, Sunrisers brought back Indian opening batsman Shikhar Dhawan, uncapped allrounder Deepak Hooda and Indian opening batsman Shikhar Dhawan back to the side via Right-to-Match card option. New Zealand captain Kane Williamson, who played for Hyderabad in the previous two seasons, was also bought by the franchise for Rs 3 crore. Hyderabad also caught attention when they spent Rs 11 crore to buy Manish Pandey’s services who played for Kolkata Knight Riders in the past few seasons, making him the second most expensive Indian, only after Jaydev Unadkat.

Once again, England all-rounder Ben Stokes remained the most expensive player at the auction after he was bought for Rs 12.5 crore by Rajasthan Royals.

A total of 169 players were sold (56 overseas) as eight teams spent almost their entire purse of Rs 80 crore to make their full squad for the IPL season 11.

Unadkat attracted a bid of Rs 11.50 crore from the Rajasthan Royals.

Afghanistan leg-spinner Rashid Khan earned himself a mega IPL contract with the SRH, who used their Right to Match (RTM) card to retain the highly-rated Afghanistan sensation for an eye-popping Rs. 9 crore.

Ivy Mae already excited about the @sunrisershyd anthem. Non stop wanting to play the song. Looking forward to another amazing season with the Orange Army.