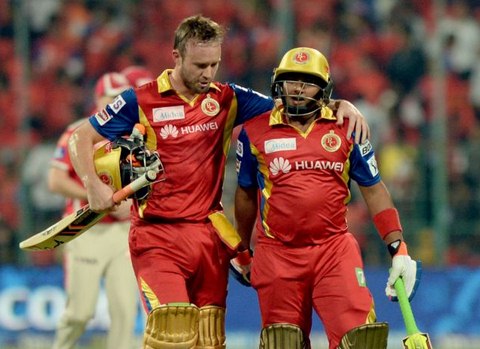 Sharing a dressing room with Kohli has been an education. “Virat bhai tho alag hee level ke hain,” he smiles. “His time-table is completely different from that of us normal players – his gym-work, his diet, his batting, everything. Virat bhai has so many commitments: so many ads to shoot, so much to sign. On top of that, the tension of captaining the side, picking the team. But there is never a dip in his performance. So how strong must he be mentally?” When he tore the ACL in his knee last year, Sarfaraz feared that RCB may cut him loose, but the franchise didn’t, instead taking care of his medical expenses and his post-surgery rehabilitation. Kohli even sent him a text message, asking him to use the opportunity to understand himself better. Sarfaraz is grateful. He feels no pressure that the team chose to retain him over other players. “Everyone has something expected of him by someone,” he says. “Virat bhai is under way more pressure than me. The more you think, the greater the tension. So I choose not to think.”]]>