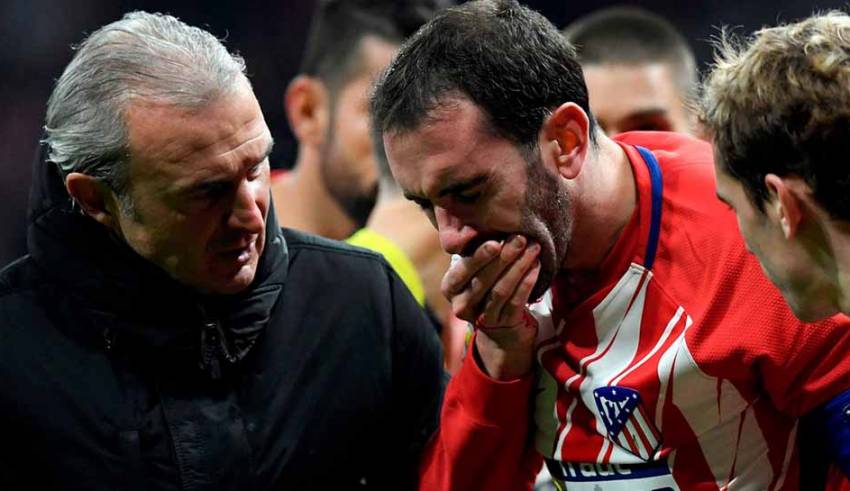 La Liga news: Atletico defender Diego Godin loses three teeth in nasty collision during match Atletico Madrid defender Diego Godin lost three of his teeth after being caught full in the face by Valencia goalkeeper Neto during Sunday`s La Liga encounter, his club said.The Uruguayan centre back had to be substituted after the goalkeeper accidentally caught him with an elbow while trying to beat away a free kick early in the second half Atletico, who won the game 1-0 at the Wanda Metropolitano, said the Uruguayan centre-back would undergo surgery in the coming days after having three of his upper teeth knocked out. They did not say how long he would be absent. Neto did not reach the ball and hit Godin, who was taken off in the 51st minute with blood streaming from his mouth. “They will have to kill someone for us to get a penalty, if that’s not a penalty on Godin,” Simeone told reporters. Atletico defender Stefan Savic also had to be replaced after suffering an apparent hamstring injury. “The doctors will provide a better report,” Simeone said of the injured duo. Godin was cleaned out by Neto as the two went up for a high ball following an Antoine Griezmann free-kick. He was taken off bleeding heavily after the incident, which happened early in the second half. Angel Correa scored the goal for Atletico, who are second in La Liga, nine points behind leaders Barcelona. The result lifted Simeone’s side to within nine points of leaders Barcelona, but the coach believes they have a long way to go to fight for the title. “We want to grow as a team,” he said. “I leave this game thinking about the work my players did, they were committed, that brings me satisfaction as a coach.”]]>