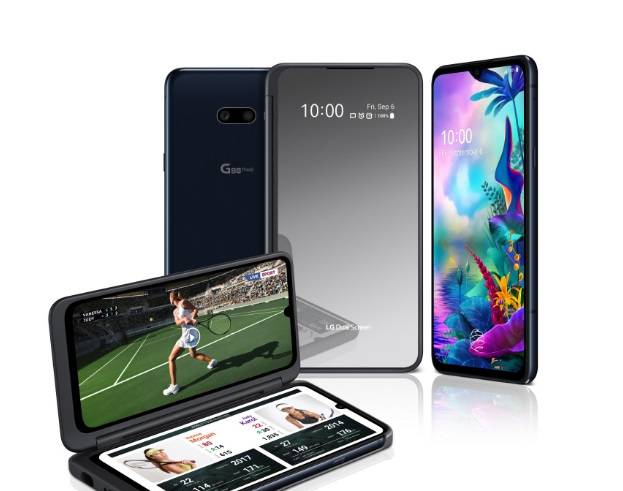 The updated version of already released LG G8 ThinQ has now been announced by LG – LG G8X ThinQ. This is going to be the company’s first smartphone that features an in-screen fingerprint scanner. Not only this, but LG also announced an enhanced edition of a DualScreen flip case for this upcoming smartphone.

The LG G8X ThinQ comes with a wider screen than the V50 ThinQ with a 6.4-inches waterproof OLED display that supports a 1080 x 2340 pixels resolution. A fingerprint sensor is integrated into the screen, as mentioned above.

The Qualcomm Snapdragon 855 Chipset is available under the hood of the device with 6GB of RAM. Either it comes with palm gestures or Hand ID or not, it’s not yet announced. The onboard memory, however, is 128GB. For further storage, a microSD Card Slot is provided on the device. It’s powered by 4000mAh battery and runs on Android Pie 9.0 with LG’s UX 9.0 on top. The LG UX 9.0 based Android 9 Pie OS is the smartphone that works.

A horizontal dual-camera configuration is provided in the G8X ThinQ. The system consists of a 12MP sensor with an aperture of f/1.8 and OIS and an ultra-wide 13MP lens with a 136-degree field of perspective. And on the front side, on the other hand, it’s having a 32MP selfie camera to assist you in video calls and selfies.

A MIL-STD 810G GPU is provided in the LG G8X ThinQ. It is a dustproof and waterproof system that also has an IP68 rating. The smartphone’s front and back are flanked by Gorilla Glass 6 panels. The handset has a 32-bit quad-DAC and audiophile 3.5mm audio jack.

The updated DualScreen accessory is equipped with a size of 6.4-inches alongside a waterdrop notch like LG G8X ThinQ, and it’s also backed by a 2.1-inches monochrome display on its other side which is based on OLED. The device hinges at 360 degrees to allow users to view any angle. Users may also use the second display as a gamepad or bigger keyboard while using the DualScreen with G8X ThinQ, or they may also access two applications at once.

There is no battery on the DualScreen case. The other way to get it charged is to use the pogo pins at the bottom of the G8X ThinQ through the provided adaptor.

The official pricing and release date both are up in the air, for now. However, it’s most likely to start arriving in stores before 2019 ends. And in terms of pricing, it’s too prompt to put even an educated guess. However, it’ll be named LG V50S ThinQ in its homeland, South Korea. We’ll keep eyes on Nextgenphone and GSMArena for the more updates about LG G8X ThinQ to let our readers aware with the next technology mobile phone.