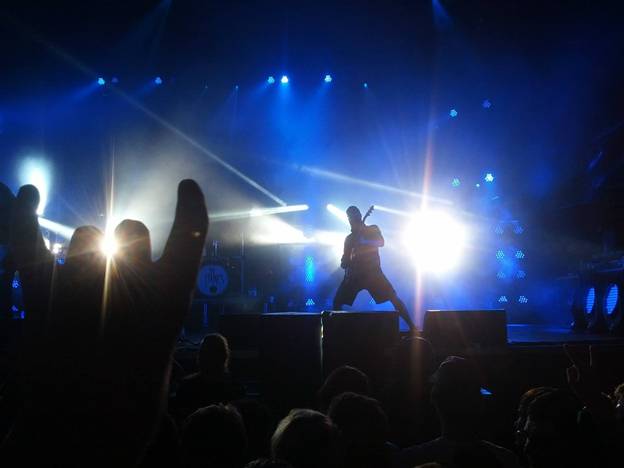 Since rock music gained popularity throughout the 1940’s, it has become popular across all generations.

Ask anyone around you what their favourite rock band is and they will be quick to rattle off their personal heroes.

Each instrument adds its own flavour and helps bands dominate the airwaves or live performance venues.

There are eight most basic instruments that any rock band absolutely need to rock and roll, the rock star style.

Rock bands rely heavily on drums for rhythm. A drum set is composed of drums in different sizes which produce a variety of sounds that a drummer manipulates to achieve a splendid resonance.

Solo drums are also typical in rock bands and are mostly unaccompanied.  Rock band drum beats are harder, which makes them unique from other genres. Drummers play around with tempo to create a rock and roll ambience that sets fans on fire.

Perhaps, the most fundamental instrument in any rock band is the electric guitar. An electric guitar is vastly different from the acoustic one, in form and function.

When amplifiers are used to achieve distortions, the sound from an acoustic guitar becomes stronger and more powerful than when it is used without.

This makes it a vital component in a rock band. Unlike an acoustic guitar which is hollow, an electric one has a solid structure. Most guitarists prefer the four-string guitar model since they are more comfortable to play as they have thinner necks and are lighter. -Some advanced bass guitarists would prefer 5-string bass guitars to allow them to play more notes. However, 5-string bass guitars are heavier and have thicker necks.

The acoustic guitar is unique as it relies on no other instrument for it to function. This type of guitar resonates sounds from strings that are plucked by fingers or with a pick.

The guitar’s body is the soundbox that acts as a natural amplifier. Through the amplification of the string vibrations, the six strings in the acoustic guitar produce a variety of timbres that add to the range of the rock band sounds.

Keyboards are sensational instruments in a rock band. They have the potential to turn things around as they cover significant components of a song such the melody, harmony, rhythm, and bass.

This makes it a fantastic all-in-one accompaniment. With this uniqueness, a keyboard has remained a popular instrument which assures rock band fans nothing but splendid music.

Even though in the beginning violins were not significant instruments for rock bands, they still played a vital role in lighting up the stage.

To get the best violin for your rock band, it is always prudent to consider wooden ones as they are more solid.

The best sounds come from solid violins as they prevent echoes from resonances of the hollow body when under amplification on stage.

The effect of this woodwind instrument in a rock band is superb.  Its pitch is a thing to marvel whether you are a fan of rock or not.

The versatility of the sax makes it phenomenal in a rock band as saxophones can synchronize baritone, tenor, soprano and alto to give any band a sophisticated sound.

Just as the name suggests, a bass guitar has a uniquely deep sound that gives a rock band a steady rhythm.

Bass guitars have four to six strings, and what one purchases depends on the outcome they desire.

Most guitarists prefer the four-string guitar model since they are more comfortable to play as they have thinner necks and are lighter.

For beginners, fretted bass guitars are the best to start with because of their simplified learning curves.

For a rock band to achieve intense, powerful sounds, microphones must be prioritized. A rock band will be amazingly rhythmical if it has microphones that synchronize the beats and pulses with ease.

Different instruments need microphones of different frequencies for them to achieve the best resonances.

Each singer in the band needs a microphone whose frequencies are compatible with their voice.

To get the best microphone for your rock bands’ vocals, find those that have a cardioid directional pattern and always ensure that the impedance value is right.