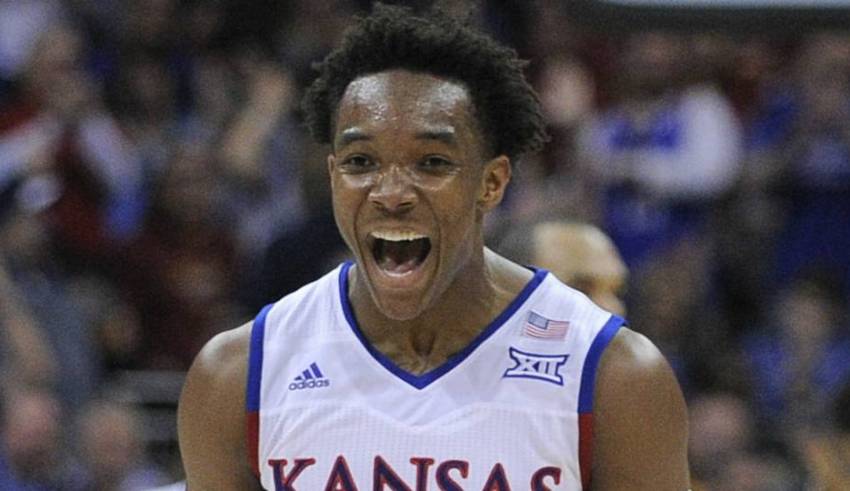 <![CDATA[]]>
<![CDATA[]]>
Home Sports Mykhailiuk, Graham Lead No. 10 Kansas overcomes deficits and its own issues to win at No. 6 West Virginia

Mykhailiuk, Graham Lead No. 10 Kansas overcomes deficits and its own issues to win at No. 6 West Virginia No. 10 Kansas rallied Monday for a 71-66 win over No. 6 West Virginia, despite trailing by 13 points at halftime.It’s hard to look at Kansas – the roster, the stats, the resume and all that comes with it – and not conclude this is the most vulnerable squad the Jayhawks have fielded since its current domination of the Big 12 began in 2005. The flaws are apparent, and they’re serious. They could easily be enough to sink the Jayhawks in an unforgiving conference. It also could just be business as usual for Bill Self’s program Tenth-ranked Kansas sputtered and struggled Monday night, but, ultimately, it didn’t matter as the Jayhawks stole a game at a rowdy WVU Coliseum, topping sixth-ranked West Virginia, 71-66, to keep its spot atop the Big 12 despite whatever issues bothered them against the Mountaineers and may persist well into the winter. The Jayhawks struggled with eight early turnovers in the first half, finding West Virginia’s full-court press too much to handle. But Bill Self made late adjustments leading to the improbable victory. Devonta Graham is the leader Kansas needs — After converting to point guard this season, Graham was handed the keys to Kansas’ offense. He responded by scoring nine of his 16 points in the game’s last 10 minutes, leading Kansas to a wild come-back win. Graham, a natural shooting guard, also dished out six assists with just three turnovers. The Jayhawks had eight turnovers in the game’s first 10 minutes, but finally settled down and finished the game with 13 turnovers. For Kansas, it’s essential Graham continues playing at a high level to reach its potential this season. 2. West Virginia needs to improve its half-court offense — “Press Virginia” does a great job creating chaos and taking advantage of opposing teams’ turnovers, but it can’t always manufacture baskets in a half-court game. Other than Jevon Carter, who has seemingly been at West Virginia forever, few Mountaineers can create their own shots on a consistent basis. West Virginia scored just 25 points in the second half. Sophomore Sagaba Konate broke out for 16 points, 10 rebounds and five blocks, and Carter had 14 points, but the team as a whole shot just 18.5 percent from 3-point range, making them incredibly easy to defend. If The Streak is going to reach 14, it won’t be with that blueprint. The grittier parts of the game are going to have to come to the forefront. Outlasting West Virginia in Morgantown while shooting 44 percent and facing double-digit deficits would suggest the Jayhawks have the toughness and ability to make clutch plays that can paper over other issues. Kansas isn’t going to overwhelm the Big 12 this year. They still very well could win it]]>