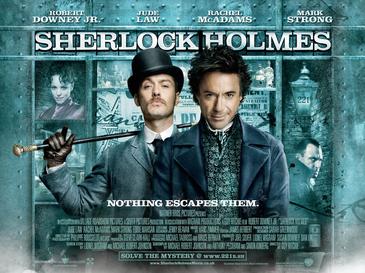 Have you ever wondered why you’ve seen so many different representations of the famous detective Sherlock Holmes on television and in movies? The character is one of the most beloved fictional creations of all time, but even when that fact is taken into account, he’s surprisingly active. Whether it’s Robert Downey Jr or Benedict Cumberbatch, there always seems to be a ‘current’ Holmes actor, and there’s always a Sherlock Holmes show or film in production somewhere.

If you’re struggling to come up with an answer to that question, we’ll put you out of your misery. Holmes appears so much because the character is in what’s known as the ‘public domain.’ The creation of the character happened such a long time ago that the original copyright related to Sherlock Holmes has expired, and the family of author Arthur Conan Doyle is no longer entitled to a cut of any entertainment property that uses Sherlock or any of the other characters Doyle created. The character’s position is similar to that of Robin Hood – another classic British fictional creation – in that nobody technically owns him, and anybody is free to use them.

In theory, the lack of copyright means that anyone can use Sherlock Holmes in any way they like. You could write a Sherlock Holmes stage show if you wanted, and nobody could stop you. We’ve even seen the character repeatedly appear at Isoftbet slots in recent years. “Sherlock of London,” “Sherlock: A Scandal in Bohemia,” and “Sherlock Mystery” are just three online slots that have appeared since the ruling, and they’re likely to be joined by more in the future. If the Doyle estate is unable to prevent the creation of new online slots, then they ought not to be able to influence the creation of any other Sherlock Holmes media either – but that hasn’t stopped them from trying.

Later on this year, a movie called “Enola Holmes” will appear on Netflix. It’s based on a series of books written by children’s author Nancy Springer, and will star Millie Bobby Brown as the title character – a character who is the younger sister of Sherlock Holmes. Enola doesn’t appear in any Holmes story written by Doyle, and so she counts as Springer’s own creation. That isn’t the aspect of the story that the people who handle Doyle’s estate are interested in, though. They’re concerned by the fact that Sherlock himself will be putting in a few appearances to help his younger sister out – and, according to them, he’ll be far too nice to everybody when he makes those appearances.

Based on the details of the lawsuit, which was filed toward the end of June and is still waiting to be heard by a court, the creation of the Netflix film has alerted the Doyle estate to the existence of the Springer books. Aside from targeting Netflix, the estate is also targeting Springer herself and her publisher for the creation of the novels, which they believe violate some of the few remaining copyrights they still own. Specifically, they feel that his ‘respecting women’ and ‘having emotions’ are protected characteristics because they only appear in the later Holmes novels, which remain under copyright. Prior to Doyle’s decision to change aspects of the character, Holmes was written as he’s usually represented on screen – cold, pragmatic, and driven by a devotion to logic and deduction as opposed to emotion. It’s the estate’s contention that only this traditional version of Holmes that comes free of copyright, and any ’emotional’ Holmes does not.

If the Doyle estate is successful with its complaint, it will create a quandary for anybody who writes any Holmes fiction in the future. It would also, however, raise a question about why the estate hasn’t acted in a similar manner in the past. During the BBC adaptation of the Holmes story, the character, as played by Benedict Cumberbatch, was heavily implied to be in a relationship of sorts with Irene Adler, which would imply a degree of emotional connection between the characters. Despite that, the estate took no action. This is likely to form part of Netflix’s response to the lawsuit. While the idea of success might seem fanciful, there is a precedent that may go in the estate’s favor.

Back in 2015, the estate (using the same legal team) sued Miramax and most of the production company behind the movie “Mr. Holmes,” which portrayed the detective in his retirement reminiscing about his life and assisting with one last case. The older Holmes was written about by Doyle during his final few novels about the great detective, but exclusively between the years 1923 and 1927. Those years are still covered by the remaining copyright, and so it was found that ‘old Holmes’ was a protected character that the estate had a right to be paid for. Miramax had to pay up, and a credit was included in the film when it was released.

Victory with one lawsuit doesn’t guarantee success with another. While it’s easy to define the character of a ‘retired Sherlock’ based on the character’s age and occupation, defining what does and doesn’t constitute an ’emotional Holmes’ might be far more difficult. It would require the law to come up with a definition of what represents an emotional state, and what constitutes an emotional comment. That would be shaky ground for any lawyer or judge to become involved with, and as a result, it’s generally suspected that the lawsuit is destined to fail. For the producers of the “Enola Holmes” movie, though – who have already filmed their movie and are working on promotional material for it – this is likely to be a nervous time.

We’ll all have to wait to see what the result of the lawsuit is, but in the meantime, let this be a lesson for any amateur or professional screenplay writers out there. If you’re going to use the character of Sherlock Holmes in any form of fiction, don’t make him old, and don’t give him emotions. If you do, you might find yourself being served with legal paperwork regardless of whether your central character ought to belong to the public domain or not!