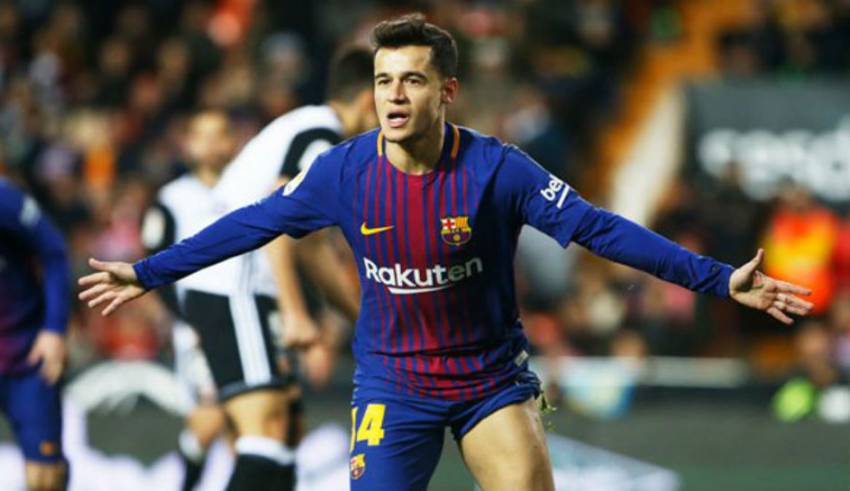 Barcelona news:Philippe Coutinho open first Barcelona goal in Copa Del Rey semi-final win Barcelona reached the King’s Cup final for a record fifth year in a row on Thursday with a 2-0 second leg win at Valencia in which Philippe Coutinho scored his first goal for the club as they secured a 3-0 aggregate semifinal success.The Brazilian was dropped for the Copa del Rey semi-final second leg at Mestalla on Thursday, but came on at the break for the ineffective Andre Gomes. And the 25-year-old made an instant impact, opening his Barcelona account in the 49th minute to give his side a 1-0 lead on the night, and a 2-0 advantage on aggregate. Valencia bossed the first half at a packed Mestalla as the hosts chased down a 1-0 deficit but their hopes of a comeback were dashed when Brazilian Coutinho slid in to turn home a cross from his old Liverpool team-mate Luis Suarez in the 49th minute.Luis Suarez was the architect, going on a mazy run and crossing to the back post, where Coutinho slid in and finished low across the goalkeeper into the far post. Coutinho, who joined Barca from Liverpool for a club record 142 million pounds ($197.66 million) in January, had been on the pitch less than three minutes when he scored, while Ivan Rakitic stretched the visitors’ lead eight minutes from time. Barcelona have won the trophy for the last three years and Sevilla now stand in the way of a fourth consecutive Copa del Rey title, and a 30th overall, with the final scheduled for April 21., a re-run of the 2016 showpiece which the Catalans won 2-0 after extra time. Sevilla beat Leganes 2-0 on Wednesday in the other semi-final to advance 3-1 on aggregate. “I feel very happy to be able to play in a final while being at the club for only a couple of months,” Coutinho told reporters. “We still have to play it and we’ve got a lot of things to do before the final. “I have been trying to score since my first game and I’m happy to have done that, although the most important thing is that the team won the game and we are able to leave here happy. “Everyone told me we could be the first team to reach five finals in a row, we all knew it and it’s a great achievement.” Valencia were looking to reach the final for the first time in a decade and coach Marcelino deployed an attacking 4-3-3 formation which helped his side put Barca on the back foot in the early stages of the game. Rodrigo Moreno came closest to scoring for the hosts when he crashed a header against the bar in the 13th minute and the Spain international was thwarted again later in the half by Barca goalkeeper Jasper Cillessen. Boss Ernesto Valverde said, in quotes reported on AS: “Barca are used to reaching and playing the finals. In my case, not so much.I feel very happy as it is the fifth consecutive final that the players of this team are going to play, something very complicated to repeat and repeat.We thought it would be very difficult and that’s how it was, but we’re going home with the final ticket in our pocket.”

Valverde said defender Gerard Pique had been taken off as a precaution towards the end of the game, after the Spaniard was replaced by Yerry Mina for the final seven minutes. Valencia boss Marcelino added: “I think that in the first half we deserved to go level, but we did not do it and then their goal [Coutinho’s] decided the tie. “We played a very good first half and we had some very good chances to score and level the tie, but when you’re playing against these teams if you don’t score the chances you get you pay a price,” said Valencia keeper Jaume Domenech.]]>