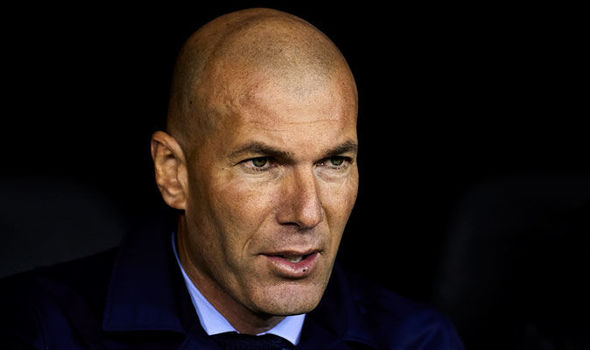 <![CDATA[]]>
<![CDATA[]]>
Home Sports Psg vs Real madrid I don't think much will change Our motivation will be the same, against a good team with very good players says Zinedine Zidane

Psg vs Real madrid I don’t think much will change Our motivation will be the same, against a good team with very good players says Zinedine Zidane Paris Saint-Germain will attempt to overturn a 3-1 deficit when they host Real Madrid in their heavyweight Champions League last-16 second leg on Tuesday  but do so without the injured Neymar.The world’s most expensive player is recovering from a foot operation in Brazil, yet the French club remain hopeful they can overcome the defending European champions and advance to April’s quarter-finals. “I speak with him practically every day, so yes we have agreed between us that we would see each other again later on in this competition,” said Paris defender Dani Alves when asked if he had been in touch with his fellow Brazil international.”For sure, we will feel his absence. But between sitting down and crying and getting up and getting on with it, I always opt for the second option.” former Real Madrid star Angel Di Maria, who is set to replace the Brazilian in the Champions League on Tuesday. before a sell-out crowd of around 47,000 at the Parc des Princes.”He is a spectacular player Zidane added: “Some things change, some don’t. He Di Maria’s an exceptional footballer, we know who he is. “He played very well for this club, but whoever comes in for Neymar will be highly motivated and hoping to put in a good performance. “He has a great history here at Real Madrid. He can play anywhere across the front and covers a lot of ground. “He has a good shot and is very quick. We’re going to try and play our game, but we know they’ll ask a few questions. “I don’t think much will change. Our motivation will be the same, against a good team with very good players PSG took the lead in the first leg in Spain last month through Adrien Rabiot only for Real to hit back with Cristiano Ronaldo scoring twice to break through the 100-goal barrier for the club in the Champions League. Marcelo also scored for Real, who are aiming to become the first club since Bayern Munich in 1976 to win a third consecutive European Cup. Madrid have not been eliminated from the Champions League this early since Lyon beat them in 2010. However, PSG are relying on their formidable record at home, where they are unbeaten in over 50 games going back two years. They have also overturned a 3-1 first-leg deficit against Real before, winning 4-1 in their UEFA Cup quarter-final return in 1993.George Weah scored for PSG that night. Now the president of Liberia, his son Timothy made his professional debut for the Ligue 1 leaders at the weekend. A repeat of that famous comeback would be the biggest result for PSG since the Qatari takeover of the club in 2011, after four straight quarter-final eliminations and then a humiliating loss in Barcelona in the last 16 a year ago. “I think that we need games like this and to beat these teams to take a step forward and so that our opponents really take notice of PSG, and don’t just think we have loads of money,” said Alves, who played in two Champions League final victories for Barcelona. “PSG have had their limits in this competition in the past and now we need to go beyond them to keep on progressing as a club.”An elimination would surely spell the end for coach Unai Emery, who is out of contract in June.Similarly, an exit would be disastrous for Zidane, with Real currently 15 points behind leaders Barcelona in La Liga and already out of the Copa del Rey.”After the game, it’s going to be difficult for one of the two teams, but that is football,” said Zidane.]]>