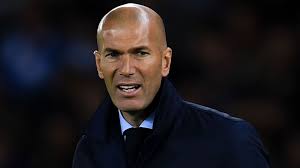 Real madrid Coach Zinedine Zidane fighting for future in PSG Champions League tie Zinedine Zidane inspired France to World Cup glory as a player, but his extraordinary career has to a large degree been defined by the Champions League.His magnificent volleyed goal for Real Madrid in their 2002 win over Bayer Leverkusen at Hampden Park in Glasgow is one of the greatest to be scored in a European Cup final. As such, it is up there with his brace in France’s 1998 win over Brazil, his country’s Euro 2000 triumph and the infamous headbutt on Marco Materazzi during the 2006 World Cup final among the most memorable moments of his playing days. He has carried on his love affair with the Champions League as a coach, from his role as assistant to Carlo Ancelotti in Real’s 2014 triumph to leading Madrid to glory himself in the last two seasons.But now Zidane’s future in charge at the Santiago Bernabeu is hanging by a thread, possibly tied to the outcome of the looming showdown with this formidable Paris Saint-Germain outfit. For 18 months after his appointment in January 2016, the Frenchman could do no wrong, but a little of the magic has deserted him recently.”This is an unprecedented situation, but we must live with it, hold our course,” Z idane said in an interview with French radio station RTL aired on Monday. He has won eight trophies since replacing the unpopular Rafa Benitez in the Madrid dugout, including an unprecedented five in one calendar year in 2017. Zidane also oversaw the club’s first La Liga and European Cup double since 1958 as well as a record 40-match unbeaten run.But now they stand fourth in La Liga, at risk of finishing off the podium in their domestic league for the first time since 2004. Finishing second behind Tottenham Hotspur in their Champions League group also exposed them to this tougher draw. The man born and raised in a tough neighbourhood of Marseille needs the tonic of a win over the Parisian aristocrats.”We also must not dismiss everything we have done because of our form at the moment,” he told RTL, mindful that recent improved results in La Liga have not completely shaken away the doubts. “This is not some other club — the slightest negative thing here and the media make a song and dance out of it.” Zidane last month revealed that he had signed a new contract at the Bernabeu until 2020, and the respect with which he is held by those within the club, the supporters and the media means there has been no campaign calling for his head.President Florentino Perez cannot make Zidane the scapegoat for the lowering of standards as he did with Benitez before.But, equally, the 45-year-old Zidane is fully aware that coaches at the Bernabeu do not have long shelf-lives. Since Vicente del Bosque was unceremoniously sacked in 2003, Real have appointed a new coach 13 times. The longest-serving in that time has been Jose Mourinho, who survived for three seasons. When asked last month if he felt able to turn things around, he replied: “If I thought I could not, I would leave tomorrow.”But to RTL he added: “I like what I do. Not everyone can do this. I am making the most of it, I know it won’t last forever.”He has not yet lost a Champions League knockout tie as a coach, and he will surely need to extend that run against Neymar and co. to stand any chance of still being in charge of Real beyond this season.]]>