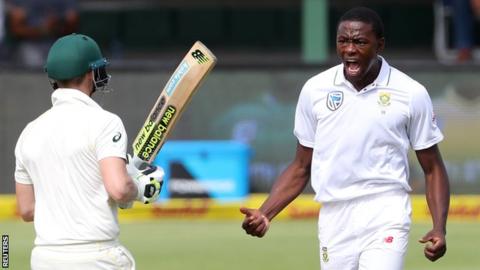 south africa vs australia third test 2018 live update : faf du plessis-Led south africa Start Favourites Against austrailia Live Cricket Score, Commentary highlights Before toss :south africa vs austraila third test match day one news With the series level at 1-1, the third Test between South Africa and Australia could potentially turn into a series decider. The third Test which will be played at Newlands in Cape Town will see the two sides gearing up against one other after a number of controversies that have grabbed the headlines. With  david waner  staircase argument with Quinton de Kock, to Kagiso Rabada’s ICC hearing, this series has already seen its fair share of drama. The Proteas will feel confident over the fact that their leading wicket-taker, Rabada has been allowed to play and will give their bowling line-up an additional edge. On a bouncy surface such as Newlands, he could once again be the match winner for the home side.    Kagiso Rabada was cleared to play the third Test against Australia after his two-match ban was overturned following a hearing. The South Africa pacer had appealed against ban which he got after making contact with Australia captain Steve Smith.On day one of the second Test, Rabada dismissed Smith and during his celebrations, he brused the Australia captain’s shoulder. He was charged with Level 2 breach of the ICC Code of Conduct for making inappropriate and deliberate physical conduct. Rabada was given three demerit points after being deemed to have deliberately made contact with Steve Smith after dismissing him in the second Test. That took the 22-year-old to eight demerit points in a 24-month period an an automatic two-Test ban. But his punishment was reduced to one demerit point on appeal. His fine was also brought down from 50% of his match fee to 25% for the offence. A statement from the International Cricket Council said Rabada had “been found not guilty of the charge of making inappropriate and deliberate physical contact with a player” and instead been “found guilty of conduct that is contrary to the spirit of the game”. It added it had “imposed a sanction of a fine of 25% of his match fee and one demerit point”. “This brings the player’s demerit points to a cumulated total of seven and he is free to play with immediate effect.” Rabada took 11 wickets in the second Test at Port Elizabeth to help the hosts level the four-match series at 1-1. The third Test starts on 22 March in Cape Town. Australian spin bowler Nathan Lyon said his team respected the ICC decision. “It’s not for me to sit here and say whether it is right or wrong,” he added. “As Australian cricketers we always want to play against best and he is the number one bowler in the world, so it will be a challenge for all of us that have to bat,” Lyon told reporters. The key issue is whether Mr Rabada made ‘inappropriate and deliberate physical contact’ with Mr Smith,” said Michael Heron QC, who heard the appeal. “I am not ‘comfortably satisfied’ that Mr Rabada intended to make contact and I therefore find him not guilty of the charge under 2.2.7. “I am entitled, however, to consider whether the conduct involved constitutes a lower level offence. “I consider the conduct was inappropriate, lacked respect for his fellow player and involved non-deliberate and minor contact. The actions contravened the principle that a dismissed batsman should be left alone.” ICC chief executive David Richardson added: “This is perhaps an opportune moment to remind all players of their responsibilities to maintaining a standard of behaviour which sets a good example to players at all levels of the game, especially the young players.

Live updates of 3rd Test between South Africa and Australia straight from Newlands, Cape Town​
The Australian  both fast bowler  Mitchell Marsh and Josh Hazlewood has dominated the South African batsmen in the first 10 overs. Dean Elgar and Great  Hashim Amla are now trying to consolidate South Africa after Aiden Markram’s fall Hashim Amla departs for 31. Australia gets the breakthrough after lunch. Josh Hazelwood pitches it short and Amla goes for the pull and is holed out at fine-leg. SA 92/2