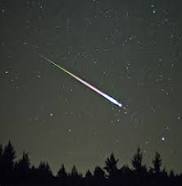 the leonids meteor shower occuring meteor storm: The 1833 Leonid meteor storm included rates as high as an amazing 100,000 meteors per hour, Earthsky.org said. This happens each year as Earth’s orbit moves through the Comet Tempel-Tuttle trail. Since we know the earth’s orbit and timing of it, we can predict when it moves through the debris of a comet. For instance each year we know we will pass through Halley’s Comet in October and that’s when the Orionid meteor shower peaks. What is the Leonid Meteor Shower?

The Leonid Meteor Shower is one of six significant annual meteor showers. A meteor shower happen when too many meteoroids (rocks in space) fall towards the Earth after breaking off a comet – a small, icy object in the Solar System which orbits the sun in an different way , unlike our Earth’s circular orbit. This particular event is called the Leonids because it appears to come from the Leo star constellation. It occurs when the Earth passes through debris which has broken away from the comet Tempel-Tuttle – which has a whopping 33-year orbit around the sun. When is the best time to watch? The Leonids will be seen Saturday.David Samuhel, a meteorologist and astronomy blogger at AccuWeather, said people should dedicate at least an hour to viewing the meteor shower. “Do not look at any light source during that hour like a phone, flashlight, or any type of screen,” he said. “Your eyes will gradually adjust by a half hour, then you will have perfect night vision. You also want to lay as flat as possible so you can see as much of the sky as possible.” Your best bet is to take a peek at the night’s sky TONIGHT (November 17), when the meteors peak. During this time, you should be able to see around 20 meteors an hour. According to experts, it’s best to lie down on the ground and relax your eyes so you don’t focus too hard on one part of the sky, only to miss a meteor in another The Leonids can be seen from anywhere in the world, and you don’t need any specialist equipment.For the best viewing, head outside when it’s the darkest.]]>