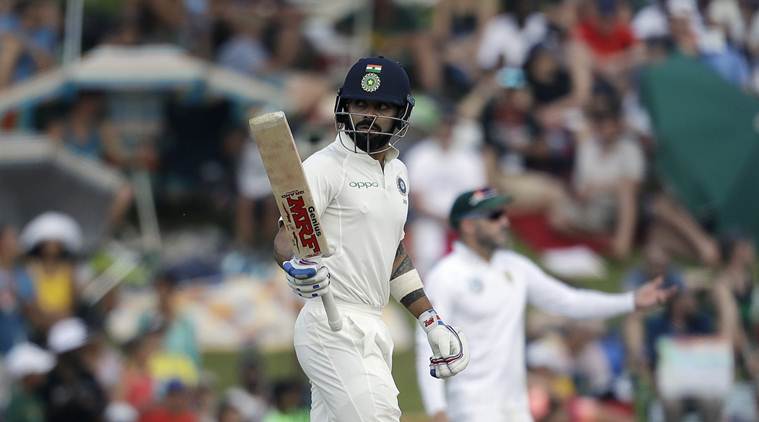 What it’s like to watch a game at Supersport park Centurion – braais, jacuzzis and some chill time on the grass banks, @28anand tries to get them all covered.

Only 11 overs could be bowled in the final session first with rain interrupting play for over an hour and then bad light forced players to go off the field, and eventually, early stumps were drawn. But before that, de Villiers compiled his 42nd Test fifty, helping his team extend the lead over India to 118 runs. At the other end, Elgar made an unbeaten 36, putting his best survival technique on display. Right after the rain stoppage, Elgar had edged a rising delivery from Bumrah, but the ball flew between the wicketkeeper Parthiv Patel and first slip Cheteshwar Pujara, with both fielders making no attempt at the catch.

That’s Tea on Day 3 of the second Test and SA are 60/2 and lead by 88 runs. It was @Jaspritbumrah93 who took both the wickets. More details here: https://t.co/BsnwXUTXv4 pic.twitter.com/RusnwASR5w

In Virat Kohli ‘s first 11 test hundred’s, 2 scores of 150 + ,next 10 hundred’s, all converted to 150 + .The thing about big players, when they score, they make it count. Important now for the bowlers to bowl with discipline. #SAvIND

For India, Burmah bowled with intensity but lacked support from both Ishant Sharma and Mohammad Shami, whule Ashwin looked threatening, but did not get enough purchase from the track to break the vital partnership. South Africa, starting their second innings with a lead of 28, would have expected to see Ashwin in to the attack early, but Kohli went one step ahead and opened with the off spinner. Ashwin got the ball to rise from a good length delivery, indicating that the pitch had become two-paced. as result end South Africa 90/2 (AB de Villiers 50*, Jasprit Bumrah 2/30) & 335 lead India 307 (Virat Kohli 153, Murlai Vijay 46; Morne Morkel 4/60) by 118 runs This was Kohli’s second Test hundred in South Africa, the second-most after Tendulkar who has five Test hundreds here. Kohli also became the first visiting captain to touch the 150-run mark at Centurion. The Delhi boy is the first overseas captain to score a Test hundred at Centurion. The previous highest for a visiting captain at this ground was 90 by MS Dhoni in 2010.]]>