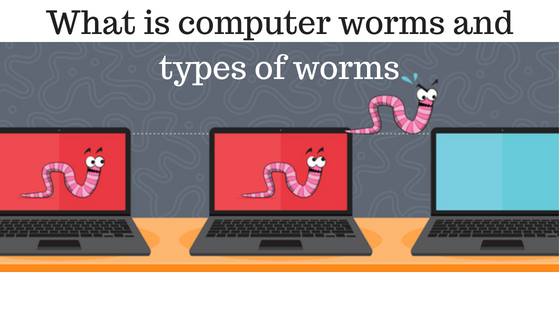 what is computer worms and types of worms then you are in right place A program which is self-replicates is known as computer worm, and this uses PC’s network as a medium to connect to transfer a copy of itself to other computers within that network. It has the ability to doing so this without any input from the user. Worms come in various form, but unlike viruses, it doesn’t require a host program to run, but like viruses, they almost always cause damage to the infected computer. Email worms An email worm makes the PC’s email client its agent to spread itself. The way it operates is either it sends a link within the email which when clicked, will infect the entire computer, or it will send an attachment that, when opened, will start the infection. Once it enters and installs itself, it will search the host computer for any email addresses contained on it. It will then restart the process again, sending the worm without any input from the user. An excellent and relevant example of a worm is the “ILOVEYOU” worm, which infected millions of computers globally in 2000. Email is the easiest door for infacted system from malware and virus like Gstatic virus, Shortcut virus etc. read full removal guide to remove Shortcut virus from your system.   Internet Worms Internet worms are always on the lookout and scan the web for vulnerable machines. Internet worms are entirely self-governing programs as they do not need any medium to spread itself. Their only requirement is an infected machine to scan the Internet for other vulnerable computers. When a vulnerable computer is found, the worm will infect it and begin the process again. Internet worms are most designed to bring up the newly discovered security leaks and issues on the infected machines that haven’t updated and installed the latest operating system and security updates. If you want to remove browser hijacker from your system click here. File-sharing Networks Worms The exchange of data and information in this world for sharing various things is helpful but if we look that the flip side it becomes harmful also. Worms which spread through file-sharing have easy access because file-sharers do not know precisely what they are installing and downloading. In this process, the worm will copy itself into a shared folder with an unassuming name. This infection spreads faster someone downloads a file from other network downloads files from the shared folder; they will unwittingly download the worm, which then copies itself and repeats the process. An excellent example of this file sharing worm came up in 2004, the worm was called “Phatbot” infected millions of computers globally, and could steal personal information, including credit card details, and send spam on an unprecedented scale. Instant Message and Chat Room Worms These work in a similar way to email worms. The modus operandi of this infected worm will make use the contact list of the user’s chat-room profile or instant-message program to send links to infected websites. These become less effective as email worms because it needs a recipient to accept the message and click the link. They tend to affect only the users of the particular program. Our suggestion and recommendation To attract the customer, there are many free and paid anti-malware software online to choose from; the free version will help you scan and detect a small amount of malware whereas the paid version thoroughly cleans and optimize your computer. We would like to recommend our best free tool called Malware Crusher removes all regular threats from your Windows PC and makes sure that all infected windows resources are placed with safer versions. It profoundly scans your PC for any malicious program that might have got into your computer and also helps to detect any suspicious behavior on your computer. Removes all malicious and infected files from your PC and keeps a record of all the malicious programs deleted. You can choose when and what essential programs to restore at a later time.  ]]>

Travel The luxury of travelling is not easy in today’s world, even though the choice…