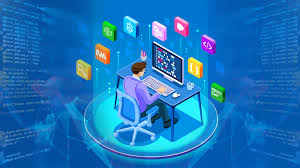 Every day, we witness a new technology coming in the market and every time with upgraded features. This makes the task of choosing the best front-end technology quite a big deal. Every technology is designed with the purpose of meeting the specific requirement of its users. In this race of advanced technologies, React JS is one that is being used in almost every Software Development computer. But do you know the reason? Why do customers prefer to hire React Js Development Company for the project? Well! Let’s find out how React Js Development can help you in your next project.

Before we proceed next, you need to know what is React JS?

React JS is an open-source Javascript platform designed and backed by Facebook. It is very popular to build a single-page application. Till date, React JS has evolved a lot and become the most preferred choice of big organizations.  React perfectly caters to the dynamic, and custom-made requirements of the users with its latest and upgraded technology.

Here is why you should use the React Js for Web Application Project:

Easy to learn for Developers

The primary concern of most of the web developers is choosing the best framework to implement.  React is easy to understand for developers. If you are familiar with Javascript, you can understand and learn React JS. Also, if you have a java Developer, React JS could be your best bet. Also, if your developers don’t know about Javascript, React could be the perfect place to start.

Enable Developers to Reuse the Component

In React, the software development comprises the components. You ideally begin building small components like checkboxes, buttons, menus, drop-downs, etc. Later you can also create the wrapper components around these components. This way, you create multiple hierarchal components. In React JS, every component has a different logic, thus, if you like to use the button component again through your application software, you can do it.

Another big benefit shared by React is it supports the abstraction layer, which means the end-user is unable to access the complicated Internals. Only the React Js Development Company you hired needs to be aware of the internal functionality and basics. Also, the React allows the developers to design the application architecture as per their preference instead of choosing from the architectural patterns like MVC, MVVM, and MVP.

Vibrant Developer Tools EcosystemReact supports the vibrant ecosystem. In React JS, developers have a choice to choose from the built-in and customizable graphics, charts, documentation tools, and the other components that allow the developers to build their applications in the minimum possible time.

React JS increases the developer’s productivity. Sometimes, it becomes quite complicated for the developers to make changes in their application logic, but this task becomes easier with a robust React JS framework.

React JS framework is finely crafted and has everything that a developer may need to build interactive front end applications. It enhances the developer’s performance with less coding and minimal efforts. Get in touch with the React Js Development Company and witness construct your dream virtually.