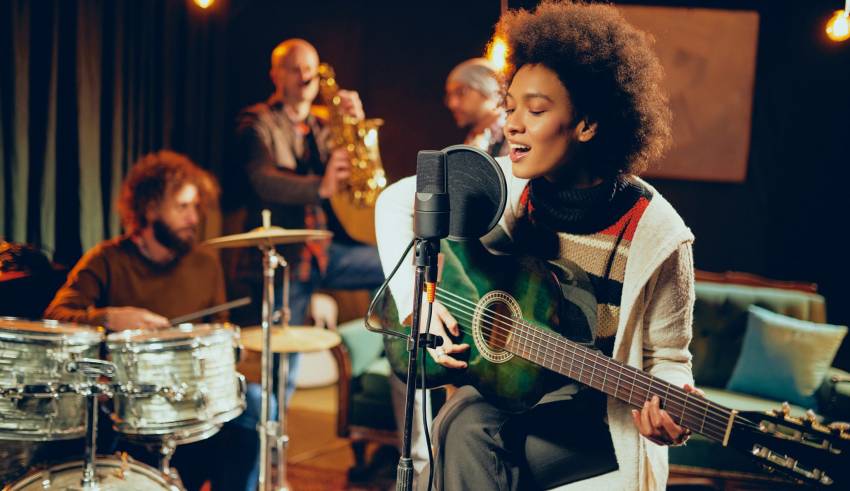 In the past, musicians used to face several problems regarding their music albums. Just like to create value of their music through scarcity. Well, there is a new shortcut to make the music hit in the secondary market. But do musicians know about NFTs in today’s world? Because nowadays, NFT has caused a splash in the whole world. At the start of 2020, due to Covid-19, several artists began to sell and buy art. As a result, they earned and paid heavy amounts on these so-called smart contracts.

For example, in February, an animated picture of a flying cat creating a scene of a rainbow went for $600,000. There are several hundreds of more examples of such a boom in digital art. All this just has happened due to NFTs. Are you curious about this giant? Well, let’s discuss it. NFT stands for Non-Fungible Token. This token simply acts as collectible digital asset. NFT is unique as anyone cannot exchange it like for like. That’s why it is known as non-Fungible.

Basically, it holds the value of art, either music or images, in the form of cryptocurrency. Just like other types of art, the music industry is also investing in NFTs for holding their content. Because NFTs are doing so. But how? The fact lies in the file that stores extra information about your art. Meanwhile, that information elevates the value of your music above the pure currency. This cryptocurrency-based digital art format has shunted millions of dollars in sales for musicians.

5 reasons why musicians will soon put their album, Gif pictures on NFT’s

The concept of NFTs came just a decade ago. But it has gained much popularity in the recent two to three years. Now, the question arises that why do NFTs matter for music?

Several reasons relate NFTs with music. By investing in NFTs, one can listen to hip hop independent musicians today. Secondly, the musicians can earn heavy amounts by selling their music directly to their fans. Several platforms offer musicians guaranteed shares from their secondary market sales. Owing to its benefits, the music industry will soon opt for it as their alternative source of earning. Apart from these benefits, there are some other reasons. Let’s have a look at them.

The main reason that will urge musicians to put their albums on NFTs is for alternative investment. Just as cryptocurrency and blockchains, NFTs digital art also assures a safe future. By selling a piece of music or Gif pictures to their fans, a musician can become a billionaire. That’s how NFTs have become a second option of earning after pure currency.

Another important reason for putting their content on NFT is to build strong relations. As NFT is full of trustworthy collectors, who have strong music interests. They feel good in supporting the small artists. Because they can understand that how an artist puts so much energy and time into music. So, it’s the best time to get your album recognized. On the other hand, fans get the chance of having original artwork of the creator.

One of the main reasons that will compel musicians to upload their content is easy authentication. This is an important urging aspect of NFT. Because it can authenticate the items rapidly and easily. Moreover, the original record of the creator is kept on the blockchains. This factor predicts that the musicians will soon put their album on NFT.

The fourth important reason is that NFTs can provide several possibilities of the content. This is the coolest factor of this system. Unlike the traditional artwork, which only exists in a single form. The content on NFTs comes in a wide range of features. The Gif pictures can come in 2D and 3D formatting. One can enjoy the music with mind-blowing graphics. But still, the music exists in its original form.

The fifth important reason for using NFT is its anti-forgery feature. In the real world, cases happen when fraudulent steals or copies the music. Those cheaters have also tried to steal original versions from NFT. But all their effort is in vain. Because the NFT underpins the content with the blockchains. It means NFT also provides advanced security features.

Which musicians are using NFTs?

Owing to such important benefits, several people in the music industry are using NFTs. Are you thinking about which musicians has Non-Fungible Tokens ? Well, many great artists share create their album and share on the internet. But still do not get such creditability and collectability of their work. So, they are testing this format. Last year, one Deadmau5 earned millions by selling NFTs for virtual stickers. Likewise, Canadian electronic music producer Jacques Greene auctioned the publishing rights to a new single through NFT.