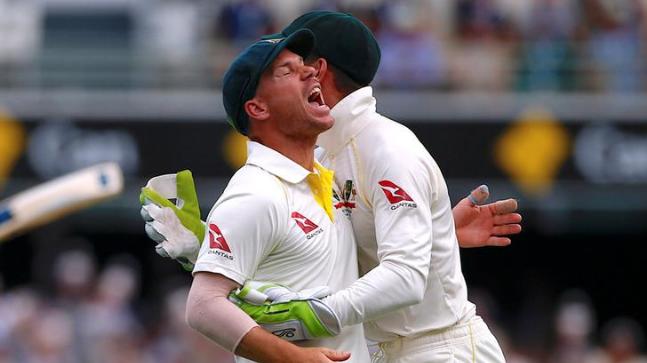 Australia vice-captain David Warner has said a ‘vile and disgusting’ sledge about his wife from South Africa wicketkeeper Quinton de Kock was the trigger for his angry outburst in the players’ tunnel during the Durban test. He and South Africa’s Quinton de Kock were both charged by the International Cricket Council (ICC) after an incident in the first Test in Durban.Video footage appeared to show Warner having to be restrained by team-mates during an altercation with De Kock.Wicketkeeper De Kock contested his charge but was also fined by the ICC.Warner’s acceptance of a level two offence meant he received three demerit points and was fined 75% of his match fee – but avoided a one-Test ban which would have come with four points.De Kock was charged with a lesser level one offence and was fined 25% of his match fee and given one demerit point.Players who reach four demerit points within a 24-month period are automatically handed a suspension – as happened to Afghanistan keeper-batsman Mohammad Shahzad on Wednesday.In comments likely to strain already frosty relations between the teams, Warner put the blame for the incident squarely on De Kock’s shoulders. “I cop it left, right and centre, especially off the field from spectators and I’m used to that and it doesn’t bother me,” Warner told local media ahead of the second test in Port Elizabeth. “But in a proximity of my personal space and from behind me, a comment that was vile and disgusting about my wife, and in general about a lady, was quite poor I felt. “My emotional response was just something that I don’t believe should have been said and I’ll always stick up for my family and in that case my teammates as well.” De Kock, who was fined 25 percent of his match fee and given one demerit point for his part, has remained silent on the issue but the South Africa camp has accused Warner of making personal comments about their own players. Although held back by four different team mates during his verbal attack on De Kock, Warner said he did not intend to get physical with him. “I would have liked him to actually say the comment a little bit louder instead of just muttering it under his breath next to me and (wicketkeeper) Tim Paine and then walking up the stairs and saying ‘I didn’t say anything’ as soon as the rest of his team came out,” Warner said. “At the end of the day, we’re all men and if you’re going to say something you look at someone in the eye and say it.” Warner was also heavily criticised for giving South Africa’s Aiden Markram a huge verbal spray during the Durban test after the rookie opening batsman was culpable in having his team mate AB de Villiers run out. Under the ICC’s new points system, another transgression by Warner in the next two years could see him suspended for a test. Leaving aside the Durban furore, Warner said his on-field conduct had been “fantastic” over the last 18-24 months. “I play with aggression on the field and I try not to cross that line and it has been in the past that I have sort of been fiery,” he said. Australia lead the four-match series 1-0 after victory in Durban. The second test starts on Friday at St George’s Park in Port Elizabeth.]]>

5 Gifts to Make Valentine’s Day Glittery & Stunning for your Beloved!!

If you are in love, distance is not a barrier; the only thing that matters is love, loyalt…