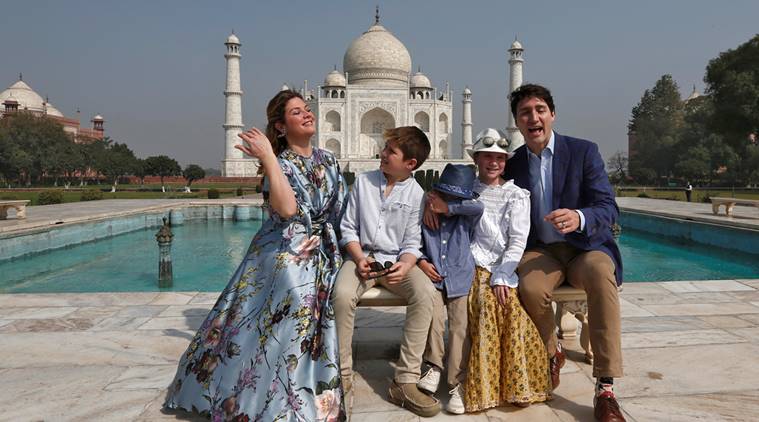 Canadian PM Justin Trudeau visits Taj Mahal, says ‘it’s special to enjoy this with my kids’ Canadian Prime Minister Justin Trudeau and his family have reached Agra for a visit to the iconic Taj Mahal. The Trudeaus landed in Delhi last evening on a week-long visit to India that’s expected to deepen ties as much with New Delhi as with Indians in Canada. The 46-year-old Prime Minister, who once remarked that he had more Sikhs in his cabinet than PM Narendra Modi, is accompanied by a chunk of his cabinet ministers. This trip, he said, was focused on creating jobs and strengthening the “deep connection” between the people of the two nations. but his father and the then Canada’s prime minister, Pierre Trudeau, who was on an official visit to India, had not accompanied him to the iconic monument because of his busy schedule. Visiting Taj 35 years later with his wife and their three children brought back many memories of his earlier visit to the monument, which his father had missed because of his official meetings. Perhaps that’s why he said, “For me to be able to be here on an official trip while bringing my kids with me to share this is really special and being able to enjoy this as a dad with my kids is really nice”. In Taj visitors’ book, he wrote, “Thank you for the wonderful visit to one of the most beautiful places in the world”. His wife, Sophie Gregoire Trudeau got emotional after seeing Taj Mahal and said, “that’ it’s Incredible”. His three minor children also signed the visitor’s book, with the youngest one, Hadrien Trudeau, who just three years old, scribbling his initial ‘H’ on it.Trudeau mentioned about his earlier visit to Taj to the ASI officials who accompanied him. He didn’t forget to tell them that his father had missed the trip because of his official engagements. Canada’s first family was visibly thrilled by their visit and they happily posed for photographs for the media. The family also got themselves clicked on the iconic Diana bench, with the magnificent Taj behind them. The youngest Trudeau was a delight for the media photographers, as he happily posed and smiled for them. Hadrien was seen running around the monument and enjoying the time with his parents and siblings. He often used to run to his father who used to take him in his lap and lift him over his head, much to the kid’s delight. , Mr Trudeau, who is on his first state visit to India, will fly to PM Modi’s home state, Gujarat. Besides a visit to Mahatma Gandhi’s Sabarmati Ashram on Monday, Mr Trudeau will also visit the Akshardham Temple in Gujarat and lead a discussion at the Indian Institute of Management on “Education and Investment Opportunities” with students. Over the rest of the week, Mr Trudeau will participate in business round-tables in Mumbai to promote trade, investment and job creation. He will also meet representatives of Indian Film industry to explore opportunities in the field of cinema. His bilateral meeting with PM Modi is scheduled for February 23, during which the two leaders are expected to focus on trade, defense, civil nuclear cooperation, space, tackling climate change energy and education. Counter-terror cooperation is also expected to be a key focus area. India’s concerns over Sikh radicalism in Canada is understood to have figured in the meeting between the National Security Advisers of the two nations held a few days ago. A number of Justin Trudeau’s cabinet colleagues are accompanying him on this visit. Three of them are Indian origin — Science and Economic Development Minister Navdeep Bains, Defence Minister Harjit Singh Sajjan and Infrastructure Minister Amarjeet Sohi. Besides Foreign Minister Chrystia Freeland, and Science and Sports Minister Kirsty Duncan are also part of the team.In 2017, two-way merchandise trade between Canada and India amounted to $8.4 billion, split equally between exports to and imports from India. India was Canada’s eighth largest destination for merchandise exports. Mr Trudeau’s agenda is also expected to include a visit to the Golden Temple in Amritsar and Delhi’s Jama Masjid and a cricket ground. The cultural component of the visit is seen as an outreach to estimated 1.4 million people of Indian origin settled in Canada. India is Canada’s second-largest source of immigrants. Ahead of the visit, Mr Trudeau tweeted, “Wheels up for India and a busy visit,” attaching a photograph of his wife and three children boarding the aircraft.]]>