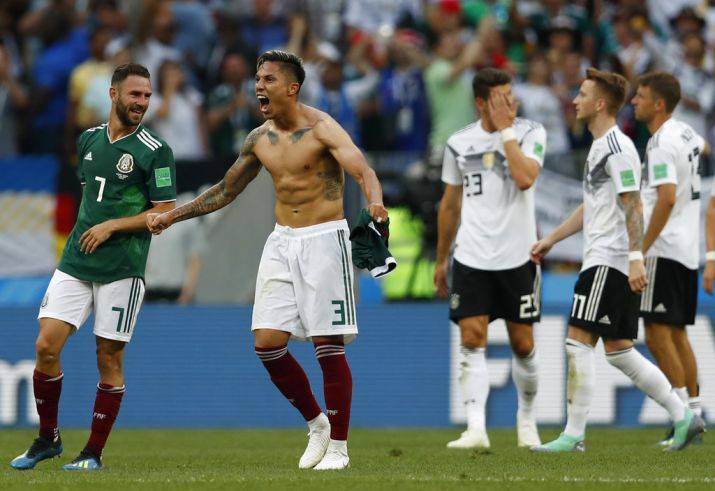 Germany vs Mexico 2018 fifa world cup:The 2018 FIFA World Cup in Russia has its first absolute stunner   Germany vs Mexico 2018 Fifa world cup highlights: The 2018 FIFA World Cup in Russia has its first absolute stunner  Germany became the third defending champion in the last 16 years to lose its opening match at the World Cup, falling to Mexico 1-0 Sunday France in 2002 and Spain in 2014 were the other defending champions to lose their opening matches. Neither of those teams advanced from the group stage.. It what can be known as astonishing, Mexico pulled off one of the biggest upsets as they beat Germany in the group match at Moscow. Despite playing their best players, Germany couldn’t find a breakthrough as Mexico looked dangerous on the counter-attack everytime they broke, which brought them a goal as well. Hirving Lozano’s first-half goal against defending champion Germany,was the difference between Germany vs Mexico 2018 Fifa world cup in an enthralling encounter in Moscow, Hirving Lozano scored the  goal in the 35th minute, picking up Javier Hernandez’s pass inside the penalty area and beating Mesut Ozil before shooting past Manuel Neuer from 10 yards Toni Kroos almost replied instantly with a free-kick but Guillermo Ochoa tipped it on to the bar and that was the closest Germany came to an equaliser. “I don’t know if it’s the biggest victory in (Mexico’s) history, but one of the biggest for sure,” Lozano said. “It’s great to start on the right foot when you are playing the world champions.” Our motto was play with the love of winning and not the fear of losing,” said a delighted Osorio. “Mexico deserved the win,” Hummels conceded, noting how he and Boateng were left exposed at the back and saying the team had failed to learn from a recent friendly defeat to Austria. “If we go on like this, I’ll be worried,” he added. “But I expect us to improve After Lozano’s goal, Mexico goalkeeper Guillermo Ochoa pulled off a spectacular save to keep the score even, palming Toni Kroos’ shot onto the crossbar. The Germans are bidding to become the first team to retain the World Cup title since Brazil in 1962. They hadn’t lost an opening game since the then-West Germany succumbed 2-1 to Algeria in 1982. Mexico supporters outnumbered Germany fans at the Luzhniki Stadium and made almost all of the noise, roaring their team forward. Lozano, a 22-year-old forward from the Dutch league nicknamed “Chucky,” got Mexico going with a deflected shot over the bar in the first minute. That set the tone for Mexico to torment Germany on the counterattack, with Lozano taking full advantage of right back Joshua Kimmich’s tendency to go forward. In his first competitive start since Sept. 16 because of injury, Neuer was kept busy saving a stinging long shot from Hector Herrera in the 10th, then a header shortly after a free kick. Timo Werner could have scored when he picked up a ball near the penalty spot, but his shot went straight to Ochoa.

With key players tiring in the second half, Mexico pulled back and substituted both Lozano and Carlos Vela. Germany then dominated but when it broke through the Mexican defense, the shooting was poor. Seeking defensive reinforcement, Mexico coach Juan Carlos Osorio brought on 39-year-old veteran Rafael Marquez to play in his fifth World Cup. Germany vs Mexico 2018 Fifa world cup highlights Kimmich’s charging runs far up the field can be a blessing and a curse for Germany. Lozano reveled in the space left for him on Mexico’s left flank and was a constant threat on the counterattack. Kimmich’s absence meant Ozil was left trying to stop Lozano for Mexico’s opening goal. Germany registered 25 shots to Mexico’s 12, but many were from long range and failed to seriously test Ochoa. Germany needs points from matches against Sweden on Saturday and South Korea on June 27 to avoid elimination.  ]]>