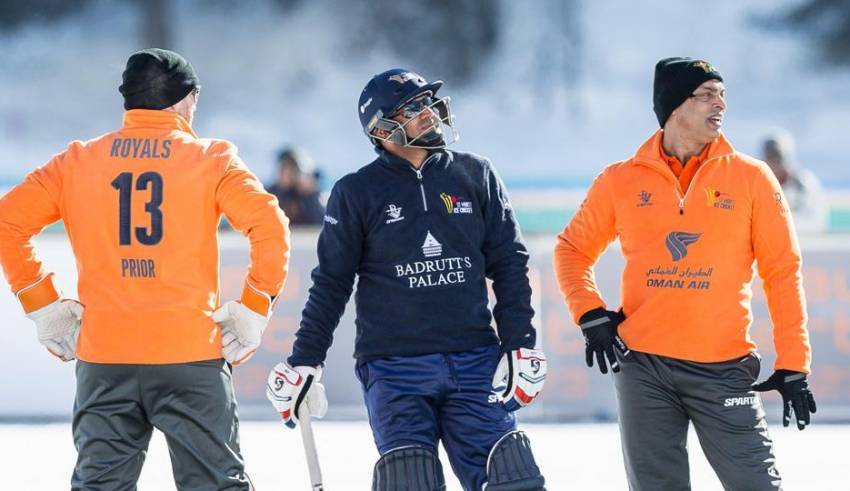 In the annals of cricket, February 8 will be known for the game taking a big step into the frozen cold of the Alps. A Twenty20 match was played in the ski resort of St Moritz on Thursday, when the fire of subcontinent cricket was settled on Swiss ice. The teams were led by the two most explosive batsmen of India and Pakistan with Virender Sehwag’s Palace Diamonds taking on Shahid Afridi’s Royals. The former Pakistan skipper’s shahid affridi team emerged victorious by six wickets in the first of two matches. Palace Diamonds scored 164/9 in 20 overs with Sehwag top-scoring with 62. Royals reached 166/4 in 15.4 overs with former England batsman, Owais Shah scoring 74. The match, played on a frozen lake with temperature around minus five Degrees Celsius, featured former stars. Australia’s Mike Hussey, Pakistan speedster Shoaib Akhtar and Sri Lanka batsman Mahela Jayawardene were all there. The players slipped and slid on the hard surface, and wore gloves and shades for protection from the cold. Fielding was an effort in the rarefied atmosphere – St Moritz at almost 6,000 feet above sea level – with few managing to collect the ball on first attempt. Shahid Afridi-led Royals face off against Virender Sehwag-led Diamonds in the unique two-day event where two matches are set to be played on ice.Sehwag was given company by former Australia all-rounder Andrew Symonds, who smashed 40 off 30 balls. For Royals, former Pakistan all-rounder Abdul Razzaq was the bowling star with figures of 4-0-18-4. In reply, Diamonds lost Graeme Smith (23) and Matt Prior (8), but Owais Shah batted brilliantly in the company of Jacques Kallis. When Kallis was out for 36, there was some anticipation that Shahid Afridi would strike some big blows. But the former Pakistan skipper was caught at deep mid wicket off the bowling of spinner Ramesh Powar. Shah and Grant Elliott then helped Diamonds over the line with 28 balls to spare Royals won the match by six wickets and chased the target in 15.2 overs. Talking after the match, Afridi said that it was a different experience. “Experience was totally different, totally different. I enjoyed playing cricket on ice, good thing is that all the big stars from all the major countries are here. Would have been better if these matches are played on weekends,” Afridi said in the press conference. The former Pakistan captain also explained the challenges he and other players faced during the game. “It was freezing, weather was too cold, fielding was challenge, specially to hold the ball and running. While batting, first two overs and gripping the bat was challenge,” he said. “Bowling was difficult for spinners, you can’t hold it properly and hands are almost numb due to cold weather,” he said adding that it was so difficult to run wearing so many layer of cloths. The former captain added that the players were also conscious due to the slippery nature of the field. ]]>