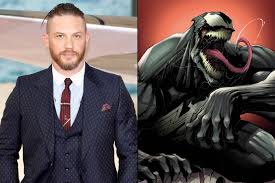 Sony Pictures Entertainment has released the first teaser for its Venom movie, with Tom Hardy in the starring role.

Sony Pictures Entertainment has released the first teaser for its Venom movie, with Tom Hardy in the starring role.
Watch Hardy, as the washed up journalist Eddie Brock, in the trailer above. Venom marks the very beginning of “Sony’s Marvel Universe,” a cinematic setting of dubious definition. Sony has insisted that Venom will take place in the same setting as 2017’s Spider-Man: Homecoming, which takes place in the Marvel Cinematic Universe. Marvel, on the other hand, has insisted that Venom is not a part of the MCU. While Venom’s teaser trailer doesn’t contain any moments graphic enough to confirm an R-rating, its dark and sombre tone does suggest something more adult than the teen-movie spirit of the most recent film in the franchise, Spider-Man: Homecoming. Entirely missing from the trailer, however, is the film’s title character, with Brock only glimpsed in human form rather than in his full mutated glory.   That’s all a bit of this-mega-corporation said, that-mega-corporation said, but, in a nutshell, it means that you shouldn’t expect Tom Holland’s Spider-Man to be a huge part of Venom — running counter to the character’s origin story. Although, of course, Sony would like to keep fan hope alive of that great big crossover in the sky. Can you make a Venom movie without Spider-Man? On October 5, 2018, when Venom comes out, we’ll know. And in the meantime, you’ll just have to watch the trailer ]]>