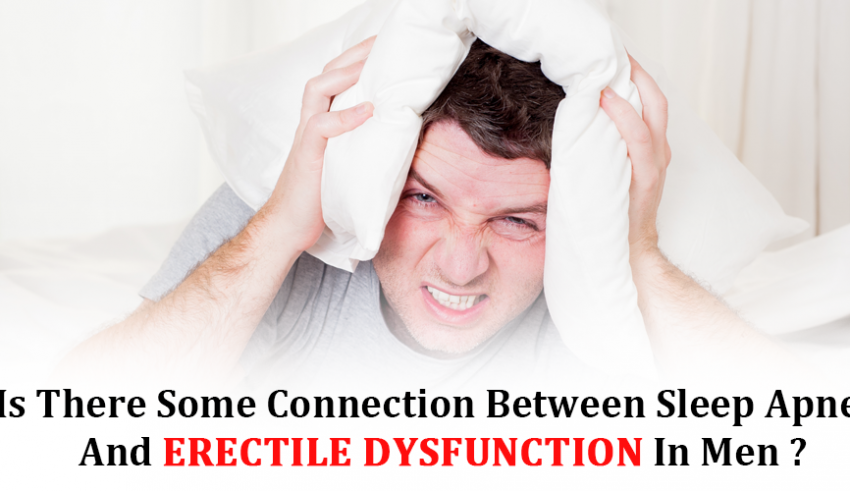 Home Health & Fitness Is there Some Connection between Sleep Apnea and Erectile Dysfunction in Men?

Erectile Dysfunction is a sexual dysfunction that impairs a man’s ability to have erections upon arousal. This condition is not favourable for a satisfactory sexual life and can even cause a rift between you and your partner if you don’t seek treatment for it.

Thankfully there a variety of treatments that you can choose from based on the cause of your erectile dysfunction which includes oral medications such as Cenforce as well as penile implants.

There are many different physical and psychological causes that can be the reason behind your erectile dysfunction and many time it can also be sleep apnea.

What is Sleep Apnea and How Does It Cause Erectile Dysfunction?

Sleep Apnea is one of the most common yet severe sleeping disorder that occurs in both men and women, but most men who suffer from sleep apnea are more likely to suffer from erectile dysfunction.

The type of sleep Apnea that often causes erectile dysfunction is known as obstructive sleep apnea, and it is a severe sleeping disorder that you should get treated as soon as possible for the safety of your health.

If your partner has complained or informed you that you are snoring too loudly and more frequently, and if you feel tired even after sleeping for the whole night, and experience day time sleepiness on a regular basis then you might want to visit you doctor and rule out the possibility of obstructive sleep apnea.

A person suffering from obstructive sleep apnea does not get quality sleep, and we know that lack of good sleep for a long period of time can increase stress and cause erectile dysfunction in men. The breathing difficulty experienced by men suffering from this condition also leads to low levels of oxygen in the body as well as poor blood circulation which is again a cause of erectile dysfunction. Obstructive Sleep Apnea has also been linked with low levels of testosterone which is also among the causes of erectile dysfunction, and the daytime sleepiness leads to lethargy and fatigue which also lowers down a man’s sexual drive.

If your doctor has diagnosed that you are suffering from erectile dysfunction, and the cause is obstructive sleep apnea, your doctor will guide to towards the best available treatments.

The treatment of erectile dysfunctions for you will further be determined by finding out the severity of your condition, your current health as well as your past medical records.

Apart from oral drugs, there are penile pumps, which are less convenient to use as and when compared to oral medications but they are a variable option of treatment for men who cannot use oral drugs due to certain medical reasons.

Apart from these two, erectile dysfunction caused by obstructive sleep apnea may also be treated by boosting the testosterone production in the body using various activities, food items, or even testosterone injections.

Even though various advances made in medical science there is no medicine that can permanently treat erectile dysfunction in men, but if the root causes of the condition are treated, then the condition can be reversed.

Apart from using medications and using other treatments of erectile dysfunction, you should also focus on improving the quality of your sleep and getting obstructive sleep apnea treated for the best.

The oxygen levels, as well as the testosterone levels in your body, often go down in your body when you are suffering from obstructive sleep apnea. So please sure that you do activities that bring in more oxygen for your body such as going out for a walk in a park, practicing breathing exercises. There are various activities, especially playing a sport which can boost the testosterone levels in your body as well as keep your heart healthy and your blood circulation good which is great for your overall health and works wonders for your sexual health.

Your Zakat can change the lives of orphans

zakat is an essential pillar of Islam. Zakat is a fixed portion of wealth, and this contri…