Tamper evidence is a key element of modern packaging techniques. It imparts a sense of confidence in the minds of the consumers that the product in the container is fresh and has not been tampered with either during or after manufacturing. Various companies including those in the pharmaceutical, foods and beverages, petrochemical products and nutraceutical vertical form fill seal. In fact, any industry where the customer actually ingests or consumes the product uses tamper evidence to enhance customer confidence in their product. It is helpful for protecting not just the company’s reputation, but also their customers’ health and confidence. Bottled water, milk jugs, medicines, different types of beverages and many more come with tamper evident seals.

This kind of packaging ensures that when the product is delivered to the customer or as the customer gets it from the store shelf, he can get it in desired form. However, this is not a one-dimensional technique. There can be several types of tamper evidence packaging solutions depending on the product and type of packaging. It is all about securing the closure of the container. Nevertheless, induction sealing is a leading method of putting up tamper evident seals on containers, and Sigma Capseal is an expert in this field.

This is a leading manufacturer (1974) of industrial grade induction sealing devices that can render tamper evidence induction sealing in containers. There is a wide range of such devices manufactured by the company. Some of these are inline devices, i.e those meant for use in a cap assembly line in factories. These devices make use of the proven method of induction sealing to make tamper evident seals. This is pretty useful in almost every packaging scenario such as in packaging medicinal pills or liquids, FMCG items, lubricants etc. The process renders a foil seal over the mouth of the container. 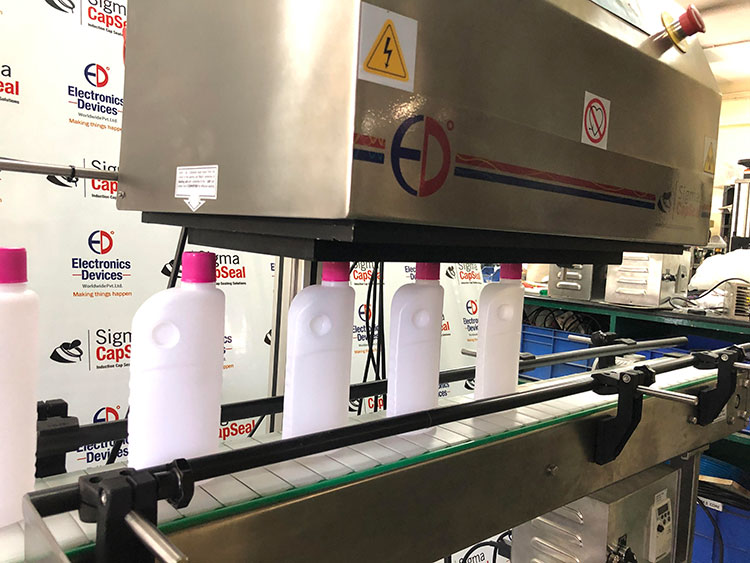 The company is involved in the whole hog of activities that revolve around closing and sealing of caps for containers. It also manufactures wad inserting machines. These machines pick pre cut liners and insert them onto caps to make seals tighter and better.

How These Devices Work

During the process of sealing, the cap is first tightened onto the container along with the foil and the combination of cap and foil lining is made to pass through the inline induction sealers. The electromagnetic field created by the coil heats up the foil, melts its wax layer, and drops the foil from inside the cap. The foil bonds to the container and creates a tamper evident seal.