<![CDATA[ <h2>Rohit Sharma, says that he was always confident about winning the game as they had plenty of firepowers

India defeated Sri Lanka by five wickets in the third and final T20 match played at Wankhede in Mumbai. Even before the small target of 136, Indian batting was faltering and the contest reached the exciting position but in the end, Mahendra Singh Dhoni (unbeaten 16) and Dinesh Karthik (18 not out) finish the game before 4 balls remaining. With this win, India finished the year with a clean sweep in the three-match series. 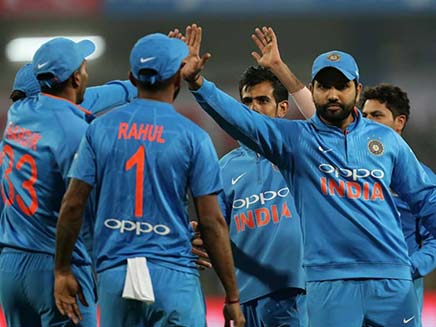 image source 136 runs target given by Sri Lanka, India’s start was not good as Lokesh Rahul, who scored a fiftieth in the previous two matches, made just four runs to become LBW to Chamera. When Rahul was out, then the team’s score was 17 runs. Captain Rohit Sharma then started the proceedings with Shreyas Iyer (30) to start the innings as Shanaaka trapped Rohit Sharma on the mid wicket boundary.Sri Lanka will go home with just one ODI win from this tour while India would head to South Africa with convincing victories in all three formats. Earlier, India restricted Sri Lanka to 135 for seven wickets. India scored 136 runs to clean sweep series Earlier, Rohit won the toss and elected to field first on a pitch that looked good for batting, Jaydev Unadkat struck early for India as Sri Lanka lost Niroshan Dickwella early. Washington Sundar looked impressive with the ball in his first match for India and also picked up a wicket. Sri Lanka lost wickets at regular intervals and never really got going. Asela Gunaratne top scored for the visitors and Dasun Shanaka’s late onslaught helped Sri Lanka reach 135 for 7 in 20 overs. For India, Unadkat and Hardik Pandya picked up a couple of wickets with Mohammed Siraj and Kuldeep Yadav claiming a wicket each. Indian skipper, Rohit Sharma, says that he was always confident about winning the game as they had plenty of firepowers. He says it was a plan to play with 6 batters and an all-rounder. Reckons every player who got an opportunity made an impact. He mentions it is a team effort and every player in the series has done his job, right from the one-dayers to the T20Is. States that a lot of the players, even those playing their first or second game, showed a lot of maturity. Feels that since the series against Australia, the Indians have done a lot of things in the right manner. Ends by saying there were some hiccups but it is a part of the learning curve. Man of the series, Jaydev Unadkat, says things went really well for him. Mentions to get such results is a big thing. Admits the Indian T20 League and the handwork in the nets has paid off. Further adds the domestic circuit has helped him mature as a player. Informs he was eager to make his comeback. He says the 2013 one was not that great but he is happy to have done well this time. Opines this in an important phase of his career and he has to keep himself motivated and hope to do well for his team. Ends by saying the performance in the Indian T20 League and the domestic circuit has given him a lot of confidence. Sri Lankan skipper, Thisara Perera, says he is very proud of his bowling unit. Appreciates the fielding and credits the coach for that. Mentions they have learnt a lot as they know India is a big team at the moment and they hope to continue their good performance in the next series as well. He hopes their batting clicks on a regular basis if they are to start winning games. Dinesh Karthik and Manish Pandey say they were under pressure but the ball was coming onto the bat and they backed themselves. Mentions it was nice to see Dhoni and Karthik finish it off in style. Reckon they batted well but it should have been over earlier. Credit Sri Lanka for their bowling. Karthik says that he was used to playing on this wicket thanks to plenty of domestic matches which have featured him at this ground. He further adds the pitch would have been a great day 1 Test wicket. Opines it is tricky to play a T20 on this wicket as there is something for both, bowlers and batsmen. Ends by saying India have been quite dominant in this tour, except for the game in Dharamsala. Appreciates the batsmen and the bowlers for their performance. We now have the Indian coach, Ravi Shastri, for another interview.]]>

Data is precious, and Facebook wants you to know it!