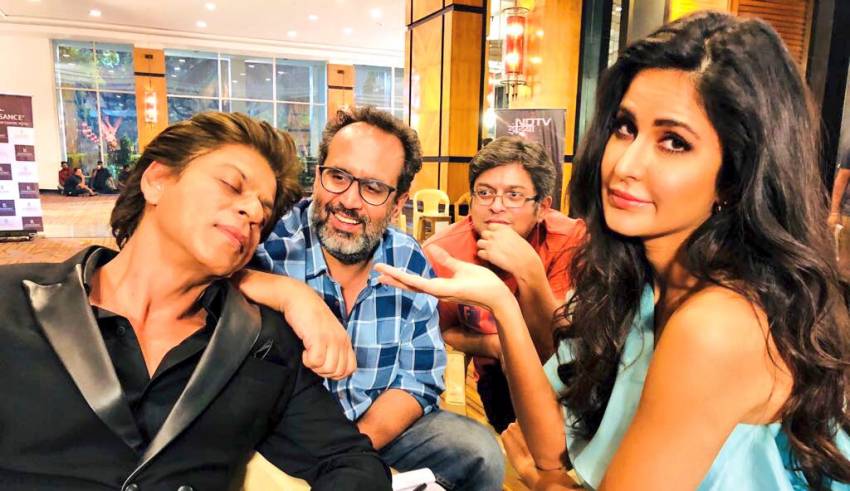 Shah Rukh Khan caught sleeping on the sets of Zero Shah Rukh Khan is currently shooting for his next big venture ‘Zero’, the teaser of which has already left fans awestruck with his small stature. The actor who plays a dwarf for the first time in the Aanand L Rai film unites with his two leading ladies Katrina Kaif and Anushka Sharma in the film. Not known for his punctuality, SRK did seem to manage to arrive on the sets early as told but tried to catch on some lost sleep here and there. The actor shared a candid picture of him napping on the sets along with the caption, “When the company is sooo scintillating & exciting that u can’t keep ur eyes open! Serves them right for calling me to early morning shoots for #Zero ( Pic courtesy: Katrina my media manager ).” Shah Rukh Khan is currently working on Aanand L Rai’s ‘Zero’, where he will be essaying the role of a dwarf. The teaser of the film has already created a lot of interest among everyone. Now, the actor shared an interesting picture from the sets of the film. Taking to Instagram, SRK shared a picture of himself with his co-stars Katrina Kaif and Anushka Sharma. In the click, he can be seen driving a cycle rickshaw with the two actresses sitting behind. All three are

When the company is sooo scintillating & exciting that u can’t keep ur eyes open! Serves them right for calling me to early morning shoots for #Zero ( Pic courtesy: Katrina my media manager ) pic.twitter.com/eNnzchfVV0

Katrina Kaif is working for the second time with Shah Rukh Khan in director Aanand L Rai’s ‘Zero’ after playing his love interest in ‘Jab Tak Hai Jaan’. According to the reports, Katrina has claimed that she can trust King Khan blindly as far as the film is concerned as SRK is personally looking into the technical details in terms of VFX, CGI and graphics and has hired the best people in the field for the same. This is the first time that the star is collaborating with the producer-director, who has earlier given hits like Tanu Weds Manu Returns and Tanu Weds Manu. The film is set to be released on December 21 this year. For Aanand L Rai, it is Shah Rukh who is the USP of his film. Katrina Kaif and Anushka Sharma play pivotal roles in the movie. Also, Rani Mukerji, Kajol and Sridevi have a special appearance in the film. Rani, Kajol and SRK will be sharing screen space together after 19 long years in Zero. The trio was earlier seen together in Kuch Kuch Hota Hai.]]>

Do you consider outsourcing as a perfect approach to generate new clients with sales? Hold…

In his Newsweek article about the obesity epidemic, Gary Taubes from the Robert Wood …