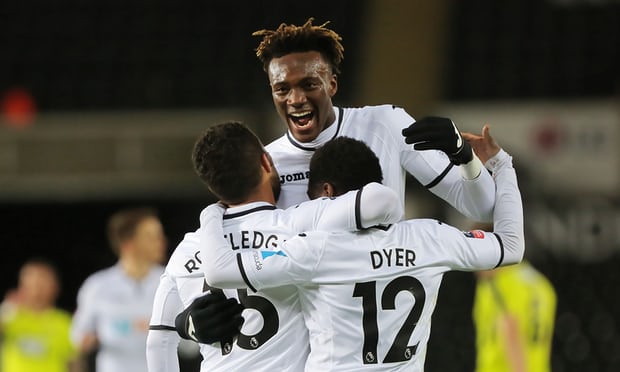 <![CDATA[]]>
<![CDATA[]]>
Home Sports Swansea notched up the biggest FA Cup win in their history as Tammy Abraham and Nathan Dyer inspired an 8-1

Swansea notched up the biggest FA Cup win in their history as Tammy Abraham and Nathan Dyer inspired an 8 1 thrashing of Notts County in Tuesday’s fourth round replay. Despite fielding a much-changed side, Swansea settled any potential nerves with two goals in the space of as many first-half minutes at the Liberty Stadium. Swansea striker Abraham put the Premier League club in front from close range on 18 minutes, with Dyer swiftly adding another on the break. Dyer made it 3-0 on the half-hour with a low shot from the edge of the penalty area, before Noor Husin got County on the scoresheet after 36 minutes. There was, though, to be no fairytale comeback for the League Two promotion chasers, as Abraham scored again in first-half stoppage time. Kyle Naughton made it 5-1 with a deflected volley following a corner on 53 minutes and Wayne Routledge curled in a sixth before midfielder Tom Carroll crashed home a well-taken seventh on 65 minutes. Daniel James marked his debut with a goal on 84 minutes to complete the rout. Swansea’s demolition job means boss Carlos Carvalhal can look forward to a fifth round trip to Sheffield Wednesday, the Championship club who sacked him earlier this season. Carvalhal has made an impact since arriving at the Liberty Stadium just a few days after departing the Owls on Christmas Eve, with Swansea beating both Liverpool and Arsenal to drag themselves out of the Premier League relegation zone. “It is important if it is the best result in the history (of the club), but the most important thing is the attitude of the players that made all the difference,” Carvalhal said. “I spoke to them before the game that we have a challenge tonight. I am very proud of the players as they accepted the challenge.” Top-flight strugglers Huddersfield will face Manchester United in the fifth round after winning 4-1 at second-tier Birmingham after extra time. Birmingham had taken the lead on 52 minutes when Che Adams turned on the edge of the penalty area to drill in a low shot. Huddersfield were soon level when Blues defender Marc Roberts inadvertently knocked the ball past keeper David Stockdale for an own goal. Steve Mounie headed Huddersfield in front four minutes into extra time. Rajiv van la Parra scored from a rebound to swiftly make it three, before Tom Ince drove in a fourth on 106 minutes to secure the Terriers a clash against United, who lost 2-1 at the John Smith’s Stadium in October. Rochdale, struggling in League One, caused an upset as they beat Championship side Millwall 1-0 to book a fifth round home date against either Tottenham or Newport, who meet at Wembley on Wednesday. With Millwall fielding a weakened team, Ian Henderson ignored the dreadful condition of the Spotland pitch to settle a scrappy game when he slotted home from close range after 53 minutes. SWANSEA CITY HIT EIGHT GOALS AGAINST NOTTS COUNTY, HUDDERSFIELD PROGRESS]]>