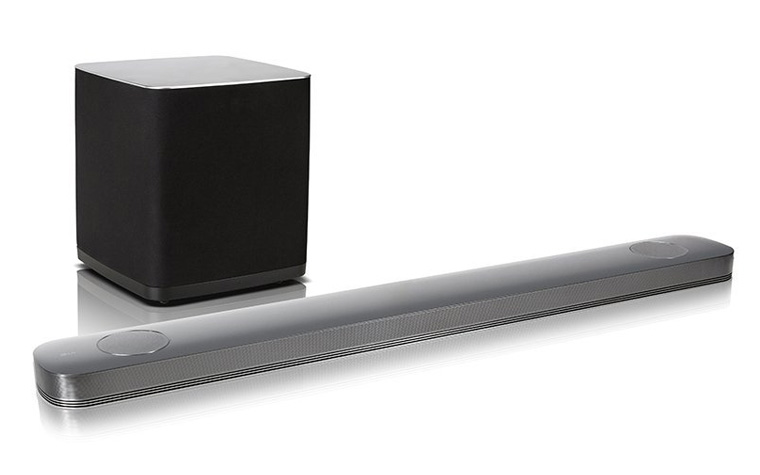 Soundbar speakers have a panoramic shape mainly for acoustic reasons but also to be easily mounted underneath or atop a flat-screen monitor or television. They are usually a single cabinet and can be combined with a wired or wireless subwoofer to increase the illusion of surround sound.

If you’re looking to create a surround sound effect without putting speakers in all four corners of a room then a Sound Bar might be for you.

A Sound Bar has a wide shape. They are shaped this way to provide a rich acoustic surround sound. The shape is also ideal to complement the wide dimensions of a television or monitor display. The best soundbars will be shaped for optimal acoustics.

Sound Bar Speakers create a beautiful sound from a single cabinet due to their loudspeaker enclosure construction. The best soundbars will have a crisp and clear sound with minimal noise. Better than your TV speakers and sleekly designed to complement the aesthetics of your home.

A Sound Bar has at least one concealed speaker and some have an amplifier to create a stereo sound effect without the need to connect to a receiver. But some people prefer to connect to a receiver because a receiver provides multiple features to manipulate a myriad of acoustic sounds. The benefits of not having to connect to a receiver are twofold. Firstly it eliminates the need for extra wires that would be used to connect to the receiver, creating a much cleaner and simpler look. The soundbar can be placed directly under or above a wall-mounted flat-screen TV. Secondly, it can be quite cost-effective to not have to dip your hands into your piggy bank to pay for both a sound bar and a receiver, the classic two-in-one feature. The best soundbars will have minimal connections to reduce the clutter in the room.

Many Sounds Bar Speakers come packaged with a wireless subwoofer which can be placed anywhere in a room and can deliver very low frequencies that the human ear cannot distinguish the direction of the sound. This gives the impression of a surround sound effect. To state the obvious but a much-needed tip, if you’re decking out a small room you can save money by buying a less powerful system and for a larger room consider spending the extra doe to deliver a quality sound. When considering a Sound Bar pay careful attention to the connectors needed as well as the ports. The best soundbars will have a wireless subwoofer to accentuate the surround sound effect with no wiring.

In conclusion, I believe that you will be pleasantly surprised with the richness of the sound produced by a Sound Bar in comparison to the speakers provided by your HDTV and if your budget permits go with a wireless subwoofer soundbar. The best sound bars include a combination of the best design, acoustics, featured, a minimum of wiring and a wireless subwoofer.